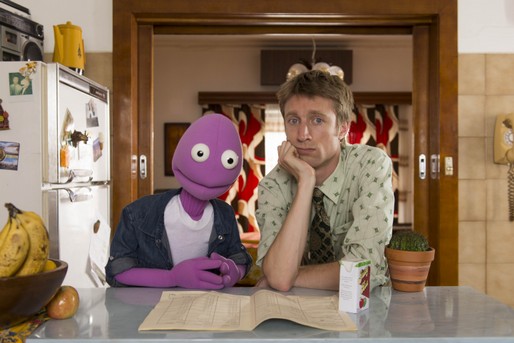 I’ve been lucky enough to have the pleasure of watching the first episode of Sammy J & Randy in Ricketts Lane, the brand new ABC comedy series coming soon to iView! Being a fan of the delightful duo for many years, I was quite excited to hear last year that finally the two were developing a 6-episode television series for the ABC, and finally the time has arrived to see it in its full glory!

In the series, Sammy J is an obsessive, socially inept and altogether hopeless junior lawyer scrambling to hold onto his last ounce of dignity while clinging to the bottom rung of the corporate ladder.  Meanwhile, his slovenly housemate Randy has seen the world from all angles.  He’s an opinionated, unemployed opportunist, desperately trying to win back the affections of his glamorous ex-wife... and he’s a purple puppet.

While they’re loyal, eccentric and prone to burst into hilarious song at any given moment, tensions between the man and puppet will soon rise.

Sammy J and Randy in Ricketts Lane also stars Nathan Lovejoy (This is Littleton, At Home with Julia), Georgia Chara (Wentworth, Home and Away) and Samantha Healy (Mrs Biggs, McLeod’s Daughters) and, in his debut role, an alpaca named Kerry.

In the first episode, confronted by the questions on the census form, Sammy J and Randy compete over who can tick more boxes. I found this first episode thoroughly entertaining and funny. I don’t want to give too much away, but there’s only particular scene between Randy and his ex-wife where you’ll find yourself laughing yet be slightly disturbed at the same time!

Sammy J & Randy in Ricketts Lane will be available to binge-watch in full on ABC iView from Tuesday 1st September 2015. The series will also screen on ABC-TV from mid-October. Fans of Australian comedy, in particular those who have a thing for skinny men and purple puppets, this is a must watch! See the official trailer below.