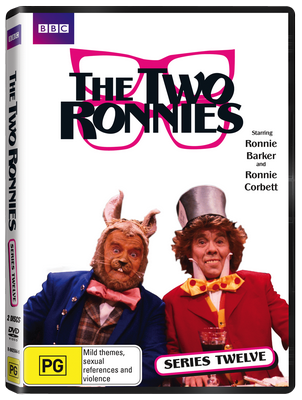 Thanks to our friends at Roadshow Entertainment, we are giving you the chance to win 1 of 3 copies of the final series of the classic BBC comedy The Two Ronnies - Series 12 on DVD. You can win:

' The classic BBC Comedy series starring Ronnie Barker and Ronnie Corbett. The six episodes of this twelfth and final series were broadcast between Christmas 1985 and February 1986. Keeping laughs coming right until the end, the series contained great sketches such as Saying Everything Twice, The Cockney Rhyming Police and Mutiny on the Crunchie. Mini dramas included It Came From Outer Hendon and Hercule Poirot Meets Miss Marple and musical numbers featured Barker’s great Lightweight Louie Danvers. The series musical guests were Phil Collins and Barbara Dickson.'

For your chance to win this classic program on DVD, all you have to do is fill out your details in the form below and you're on your way to victory!