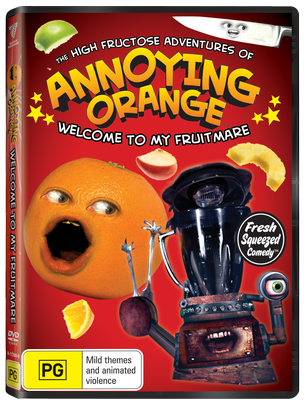 Thanks to the team at Roadshow Entertainment, we are giving you the chance to win 1 of 3 copies of the hilarious animated series of The Annoying Orange Vol.2 on DVD. You can win:

'The Annoying Orange is an American comedy series created by film student and MTV production assistant Dane Boedigheimer in 2009. It stars its creator as an anthropomorphic orange who annoys other fruits, vegetables, and various other objects by using crude-humored jokes.The show is centered on Orange who resides on a kitchen counter with other objects such as his best friend Pear, a Bartlett pear. Other fruits include Passion, a female passionfruit, a grapefruit, a tiny apple known as Midget Apple (though he prefers the name Little Apple), a small marshmallow, and an elderly lemon named Grandpa Lemon.'

For your chance to win this awesome series on DVD, all you have to do is fill out your details in the form below and you're on your way to victory!