Congratulations to our winners:
Olivia Brown, Karly Scott, David Tilley, Steve Sampson, Kath James
Please check your e-mail inbox for further details on claiming your prize. Thanks all once again! 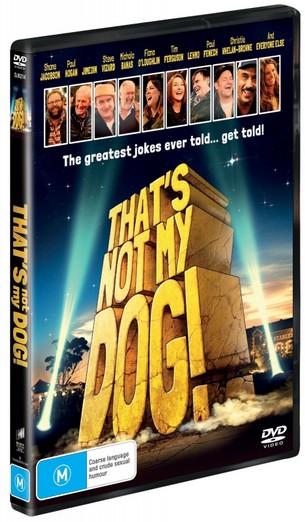 Thanks to the team at Transmission Films, we are giving you the chance to win 1 of 5 copies of the utterly hilarious joke-fest, That's Not My Dog! on DVD. You can win:

THAT'S NOT MY DOG is a joyous comedy that celebrates our love of joke telling.

The  film centres around the lovable Shane Jacobson (playing himself) who is  throwing a party. Invited are the funniest people Shane knows  comprising of Australia's biggest stars along with several Australian  music legends playing their biggest hits live, right throughout the  party. The invite that goes out is clear. Don't bring meat. We'll  provide the beer. Just come armed with nothing but the funniest jokes  you've ever heard. Shane will take care of the rest. It'll be a night of  great friends telling the world's funniest jokes over a beer and BBQ.