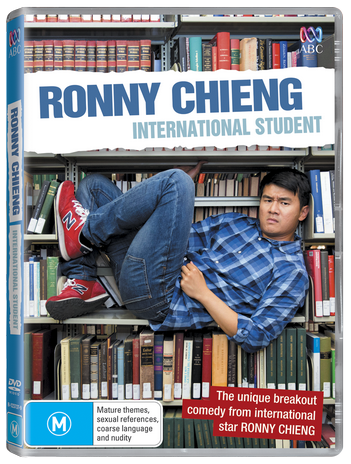 Thanks to the team at ABC DVD, we are giving you the chance to win 1 of 5 copies of the new ABC comedy series, Ronny Chieng: International Student on DVD. You can win:


' Meet Ronny Chieng. He's a Malaysian student who's come to Australia to  study law. He's smart, driven and competitive, which would make him the  perfect law student, if he actually wanted to be a lawyer.

Blunt, barbed and not afraid to cut through BS, it's not long before  Ronny is at odds with most people on campus. A genuine outsider, Ronny  is suspicious of any group that wants him as a member--be it the rowdy  Australians, the Mah-jong playing Asians or the blueblood...idiots.

Thankfully, Ronny makes an unlikely ally in Asher Angus (Molly Daniels),  a fellow first year from a small country town whose laconic nature and  eternal optimism makes her the absolute opposite of Ronny. But the one  thing they do share is a feeling of being on the outside looking in, and  seeing a bunch of idiots staring back.'