Congratulations to our winners:
Angela David, Sandra Lewis, Janette Pearce, Nick Logan
Please check your e-mail inbox for further details on claiming your prize. Thanks all once again! 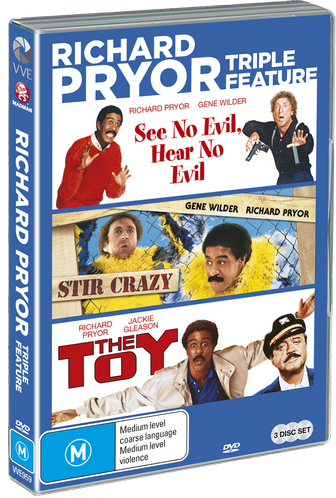 Thanks to our mates at Via Vision, we are giving you the chance to win 1 of 4 copies of the Richard Pryor Triple Pack, containing 3 of Pryor's greatest comedies on DVD. You can win:

Together for the first time this Triple DVD brings you three hilarious comedies in one special collection.

HEAR NO EVIL, SEE NO EVIL It was murder! The blind guy couldn’t see it.  The deaf guy couldn’t hear it. But now they’re both wanted for it in the  drop-dead comedy, SEE NO EVIL, HEAR NO EVIL, that reunites the  outrageous comedy duo Richard Pryor and Gene Wilder. Meet Wally and  Dave. Wally is blind, Dave is deaf. When a man is murdered outside the  newsstand where they work, the police collar these two unlikely buddies  as their main suspects. A hilarious chase ensues as Wally and Dave  hightail it from the New York Police Department to snag the real bad  guys— the wickedly beautiful Eve and her cold-blooded cohort, Kirgo  (Kevin Spacey). From  director Arthur Hiller (Love Story) comes this  zany comedy caper you won’t want to miss.

STIR CRAZY One of the looniest pictures to come along in some time!  STIR CRAZY teams two of the most brilliant and zany comic performers  today: Richard Pryor and Gene Wilder. Skip (Wilder) and Harry (Pryor)  have both been fired from their jobs, so they take off in their van for  California to seek fame and fortune, but somewhere along the way the van  conks out and they’re broke and…well, they have to eat, right? So they  land a gig as singing and dancing woodpeckers to promote a bank opening.  When two bank robbers steal their costumes and stick up the bank, guess  who gets the blame? Skip and Harry are carted off to the state pen for  125 years. They try to keep their sanity and their lives amidst: a  sadistic warden, a hulking mass-murderer and an inter-prison rodeo – all  with great hilarity.

THE TOY For the first time in motion picture history, the outrageous  talent of Richard Pryor and the ingenious comedic sense of Jackie  Gleason are combined in the same film. Gleason is U.S. Bates, a  megalomaniac millionaire who owns most of south central Louisiana. Pryor  is Jack Brown, a former journalist who has worked his way down the  vocational ladder to the position of janitor in Bates’ department store.  Among Bates’ other vast holdings is a young son Eric (Scott Schwartz),  who visits his father for one week a year. Typically, Eric is  chauffeured to the department store after-hours to pick out anything he  wants. This time, Eric has a more elaborate toy in mind —Jack Brown. So  begins the unique relationship that teaches Eric more about life than  fun and games.