Congratulations to our winners:
Glen Burke, Jane Whelan, Mary Antonio, Lucy Walker
Please check your e-mail inbox for further details on claiming your prize. Thanks all once again! 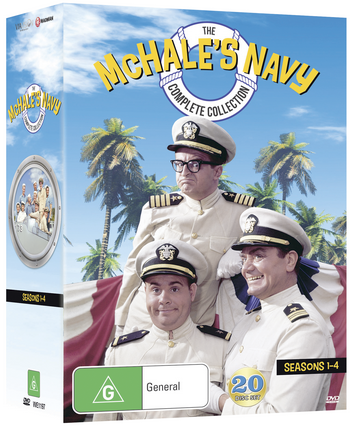 Thanks to our mates at Via Vision, we are giving you the chance to win 1 of 4 copies of the classic US 1960's sitcom, McHale's Navy on DVD. You can win:


' Climb aboard the PT-73 and set a course for classic television comedy  with McHale’s Navy: The Complete Series, a 138-episode voyage of  military mirth and madness. With an amazing cast, including Academy  Award winner Ernest Borgnine, comic genius Tim Conway, and the  indisputable brilliance of Joe Flynn, McHale’s Navy was a mainstay of  television viewing throughout its original network run from 1962 to 1966  and an unsinkable juggernaut in reruns for decades to come.

In the Pacific Theater of WWII, veteran seaman Quinton McHale  (Borgnine) is commissioned into the Navy Reserve and named skipper of  the Torpedo Patrol (PT) Boat #73. Along with his crew of good-hearted  swabbies who love to have fun, McHale is a constant thorn in the side of  his base commander, Captain Wallace B. Binghamton (Flynn). Binghamton  is forever trying to find a way to get rid of McHale and his  rule-bending crew, while McHale and company are forever scheming to keep  him from succeeding. It all adds up to the wackiest tour-of-duty  television has ever seen! '