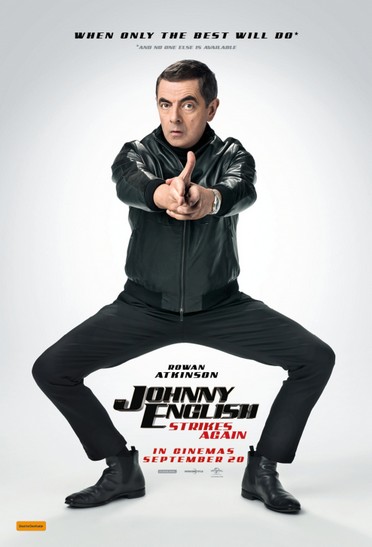 Double Pass Giveaway
JOHNNY ENGLISH STRIKES AGAIN is the third installment of the Johnny English comedy series, with Rowan Atkinson returning as the much loved accidental secret agent. The new adventure begins when a cyber-attack reveals the identity of all active undercover agents in Britain, leaving Johnny English as the secret service’s last hope. Called out of retirement, English dives head first into action with the mission to find the mastermind hacker. As a man with few skills and analogue methods, Johnny English must overcome the challenges of modern technology to make this mission a success.

IN CINEMAS FROM September 20.

Congratulations to our winners:
Steven Lawson, Shane Lane, Beth Hawkins, Sam Barrett, Eve Brown
Please check your e-mail inbox for further details on claiming your prize. Thanks all once again!
Competition Details
Thanks to the team at Universal, we are giving you the chance to win 1 of 5 in-season double passes to the new comedy Johnny English Strikes Again, starring the legendary Rowan Atkinson.
For your chance to score yourself a double pass, simply fill out your details in the below form and hit submit.
* Please ensure that you include accurate postal details. As soon as entries close, passes will be posted out to winners.
* Please enter the giveaway only ONCE - duplicate entries will not be counted.
Entries closed at Midnight on Thursday 20th September 2018. Winners will be notified via e-mail and posted on our website & Facebook page.
Good luck!
------------------------------------------------------------
Home Page | News & Reviews | Giveaways | Mailing List | Contact Us | General Site Map
© 2013-2020
Back to content | Back to main menu