Entries to this giveaway are now CLOSED - thanks everyone for your submissions!
The answer to the question below is: 19
Congratulations to our winner:
Simon Walker
Please check your e-mail for further details on your prize. 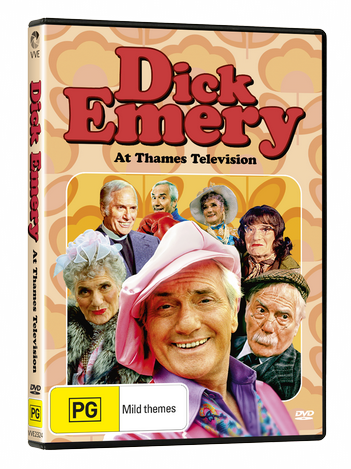 A regular on television over four decades,  Dick Emery was one of Britain’s comedy giants. A natural mimic and man  of many guises, his comic brilliance created many memorable characters  including the incomparably thick Bovver Boy, doddery old git Lampwick,  the incredibly toothy Vicar and the unforgettably camp Clarence!
Though  most of his output was for the BBC, Emery made three highly popular  variety specials for Thames Television at the turn of the ’80s.  Featuring a new cast of flamboyant creations alongside his vintage comic  favourites, these shows also feature the talents of Beryl Reid, Lulu,  The Three Degrees and Dad’s Army’s Bill Pertwee; Dam Busters star  Richard Todd helps recreate some famous PoW adventures and Lynda Carter  just about manages to hold her own among Emery’s very own Wonder Women  busty bombshell Mandy, sex-mad spinster Hettie, and the ever-popular  Duchess!
----------------------------------------------

Thanks to the the team at Via Vision Entertainment, we're giving YOU the chance to win a copy of Dick Emery's classic Thames TV specials on DVD.