Entries to this giveaway are now CLOSED - thanks everyone for your submissions!
The answer to the question below is: Santa
Congratulations to our winner:
Dawn Bryant
Please check your e-mail for further details on your prize. 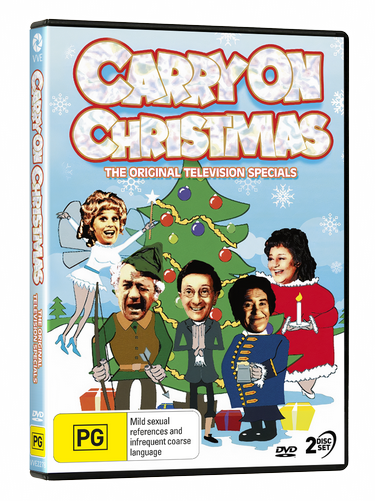 The much-loved gang from the hugely popular Carry On film series  starred in these four made-for-television Christmas specials between  1969 – 1973. Featuring favourite stories and timely traditions,  including Treasure Island, A Christmas Carrol, pantomime and much more,  these yuletide tales are presented with the usual Carry On trademark  slapstick, sauciness and innuendo.
CARRY ON CHRISTMAS (1969)
Any similarity between this show and Dicken’s novel “A Christmas Carol”  is more than co-incidental – it’s preposterous! With added characters  such as Dr. Frank N. Stein, Dracula, Robert Browning and Cinderella,  this special also stars a scene-stealing Frankie Howerd.
CARRY ON AGAIN CHRISTMAS (aka CARRY ON LONG JOHN) (1970)
The Carry On gang return spinning their own version of well-known tale  “Treasure Island”. Sid is Long John Silver and Barbara, in true panto  form, plays young Jim Hawkins.
CARRY ON CHRISTMAS (aka CARRY ON STUFFING) (1972)
The Carry On gang are stuffing the turkey, the goose and sundry other  birds, pausing only to take a bawdy side-swipe at other charitable  British institutions, such as the haunted house, the outpost of the  Empire, and the problems of our new permissive society in old-time  pantomime.
CARRY ON CHRISTMAS (1973)
It’s Carry on through the  centuries as Sid is working as Father Christmas in the fairy grotto of a  department store. Looking back nostalgically, he imagines what  Christmas must have been like in the Stone Age era, in Sherwood Forest  with Robin Hood and his Merrie Men, in an 18th-centiry drawing room, and  in the trenches during WWI.
----------------------------------------------

Thanks to the the team at Via Vision Entertainment, we're giving one of our followers the chance to win a copy of the original television specials of Carry On Christmas on DVD!