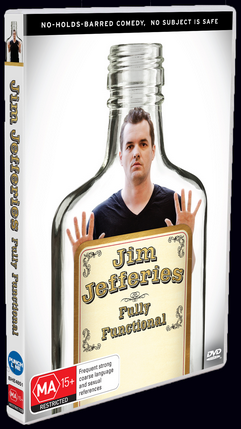 'CAUSTIC, CHARMING, CONTROVERSIAL….call him what you will, but stand-up phenomenon Jim Jefferies is acknowledged as the fastest rising, most hilarious cutting edge comic ever to claw his way to the top of the comedy world.  Hailed by critics and loved by his legions of fans, Jefferies glorious roasting of society’s most sacred cows has made him a headlining sensation throughout the globe. In his latest comedy special FULLY FUNCTIONAL, Jim spins tales of a ménage a trois in Montreal and attending a party where God is a guest.'

Jim Jefferies is one funny man. After being lucky enough to check out his recent US television series Legit (currently airing on The Comedy Channel on Foxtel), I was intrigued to find out more on his stand-up work. After reading some reviews and articles across the net, I knew what to expect. Full on coarse language, regular sex and drug references, offensive and controversial tales. He certainly lived up to his critics in this, his second DVD release here in the land down under, Fully Functional.

I can't ever recall a comedian letting go as many C-bombs as Jim does in this DVD (although it must be docile compared to his previous release, Alcoholocaust, which scored itself an 'R' classification), but it's great to see that no one is too offended in the crowd by it all! There's stories of just about everything that could shake up some feathers, taking drugs, sexual encounters and all the rest. Normally comedians who talk smut and other crap don't tickle my fancy, but for some reason Jim did!

Jim's laid back delivery of all the gags and stories is quite individual, and a style that has brought him a great deal of success overseas, however unfortunately not here in Australia.

Lovers of offensive humour and foul language, I imagine, will love this DVD from Jim. To all the other people, I recommend giving it a go, you never know...you might end up like me and are left wanting more! My advice is it's probably not the best DVD to pull out an a family get-together!