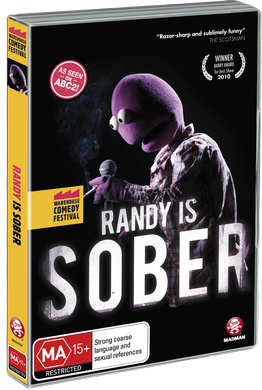 "Randy’s back, and this time he’s on the wagon.
In this razor sharp hour of stand-up comedy, everybody’s favourite felt faced raconteur casts his sardonic ping-pong ball gaze on the world around him.
Nothing is sacred, no one is safe. "

It's great to see our favourite purple puppet live on stage, without Mr Sammy J! Puppeteer Heath McIvor has done a fantastic job at making Randy such a huge comedic success.

Screened as part of ABC1's Warehouse Comedy Festival, 35 year old Randy got off the booze train almost 2 years ago now, and he has decided to tell an audience suffering cheek pain tales of his self development after he finally clambered back onto the wagon. McIvor spends the entire show behind a crate and can't see the audience, yet engages them flawlessly with excellent puppetry. So excellent, that Randy's visual humor is truly where the show shines.

I'm a stickler for DVD extras, so this is definately a favourite! I absolutely love the Good News World clips in which Randy plays Richard Branson, Bear Grylls, and the mildly controversial, Jesus Christ! As well as some hilarious outtakes, interviews and footage of Randy on the road, really makes this release extra special!

I highly recommend fans of Randy, Sammy J, or fans of comedy for that matter, to check out this hilarious feltfaced comedian at his best!

Australia You're Standing In It

Published by in DVD Reviews · 9/6/2013 10:26:00
DVD Review for Australia You're Standing In It - The Complete Series, distributed by Via Vision Entertainment.
Read all » 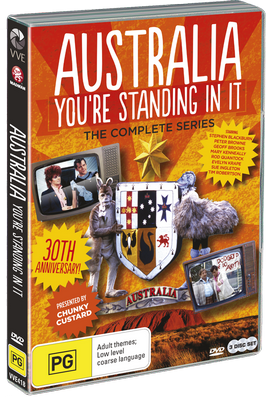 Bullet In The Face 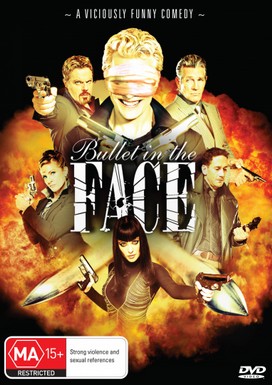 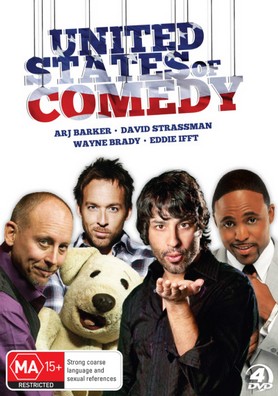